It was an overcast day in San Francisco Bay Area the morning of Friday, July 19, 1963.   That morning a flight of Navy A4-A Skyhawk aircraft from VA711 were to depart from Alameda Naval Air Station (NAS Alameda) to conduct flight operations at Crows Landing Target Range near Modesto.  The flight rules for Alameda states that all aircraft carrying weapons had to file an IFR flight plan and declare that weapons were on board under instrument rules. This flight plan was approved by the FAA years ago and to be followed as the squadron operated out of NAS Alameda when conducting flight operations using Crows Landing Target Range.  VA 711 was under Complex rules and required all hands to complete that day’s mission to get the squadron certified.  The plan of the day was all aviators were assigned to an aircraft for the days flight operations.  When the mission in the A-4A Skyhawks were completed from NAS Alameda the aircraft were reconfigured with weapons removed and turned around for a cross country and night flying time for the Squadron to return to Los Alamitos Naval Air Station the next day.  The drill assignment was certification for VA771 reserve unit and this day was completion of flight operations for the two-week drill and training.

Lt R.A. Kiner’s assigned aircraft was down and he had to stay with the aircraft until it was put back into operation. He was originally scheduled on the 7am first launch of the day but turned out to be a single launch at the end of the morning and the last aircraft that had to report on target to get the squadron certified.    On arrival at Crows Landing he was informed that a fire had broken out on the range prior to his arrival and the safety team was called to extinguish the fire.  A short time later he was informed the range was closed and he had to return with all weapons on board.  Lt. R.A. Kiner returned to NAS Alameda still in an IFR condition.   After landing at approximately 1pm he checked in.  The aircraft was reconfigured and prepared to be flown by another pilot back to NAS Los Alamitos.   Unbeknown to Lt. Kiner, the plane returned with one less bomb, the number 6 or the last bomb to be dropped from the rack in normal use.

Earlier that day at approximately 11:34:40, San Francisco experienced an event that went down in the record books as a first in the city history.   At exactly that time, there was a direct hit to the newly paved street with a new double yellow center line of Market Street near Front Street.    Witnesses described the sound made of the impact as a “thwack”, “bang”, “blam” and “boom”.  A paper boy selling papers at this intersection of the street had turned his back when the signal changed.  All the cars cleared the intersection, the bomb hit the street and the smoke charge went off.  The paper boy turned around and yelled to the Police officer coming down the street to ask him what it was. The asphalt scooped up, went up and broke a window and gouged a hole in the asphalt a foot wide and four inches deep.  The bomb then ricocheted in a 300-foot-high arc that carried it three city blocks and over several office buildings, including one eight stories tall.  It then struck a cornice on the top of the fourth floor of the Phoenix Building on Pine Street and tumbled to the concrete below, near a crew from Pacific Gas and Electric (PG&E) who were on their lunch break.  There were no reported injuries.

While analysis of the debris by officials considered it to be of military origin, military agencies denied any involvement.  As an investigation began, local police began a clean-up of the debris and the remains were removed by military authorities for further analysis.  The news of the incident went world-wide and spread like wildfire.  City Hall was inundated with calls asking for information as to the cause, responsible parties, extent of damages and injuries.  There was a claim for a broken VW radio antenna for $20.

According to news reports approximately four hours after the event, a mechanic at the NAS Alameda was auditing the equipment returned to Alameda, which included bomb racks and unused practice bombs from VA 711.  He identified an aircraft that was missing a practice bomb.    The light blue, two-foot-long, 25-pound device-was identified as a Mark 76, Model 5 practice bomb.   It carried no explosive, only a small smoke charge that was to ignite upon impact in order to mark the location where it struck a target. 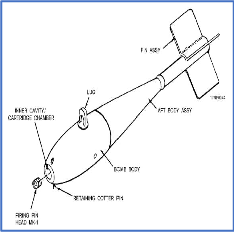 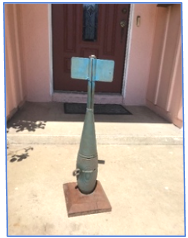 Several hours after the incident on Friday afternoon, the Navy identified the pilot of the A4-A, Skyhawk as Lt. R.A. Kiner.  This was based on the IFR flight plan and the FAA report of radar and time.   However, the pilot could not be reached, since the whole squadron had departed Alameda. The Lt. had already departed with his wife and was driving back home to Southern California.   The Lt. did not learn of the incident until some 12 hours after the event.  He first heard about it on his car radio while driving back to his home in Anaheim.  The news story described the incident in San Francisco and identified the aircraft and pilot by name.

To avoid the press, he drove to his wife’s family  home in Altadena, CA for the evening.  He wanted to speak with the  commanding officer of NAS Los Alamitos the next day to find out more details.  Taking a cab from his relative’s residence instead of driving himself to the base, he was able to enter the base and meet with the Captain of the Base to learn more details of the incident.  This was followed shortly after by meetings with operations and legal affairs office.  The Squadron needed personnel to be flown back to NAS Alameda by the VR squadron at Los Alamitos, for the inquiry that was to start on Sunday.

A Navy Board of Inquiry was quickly convened as two Admirals were on their way home from Hawaii and an investigation began to determine the facts and identify the cause of the bombing.  The board initially convened on Sunday, July 21 at the Alameda Naval Air Station.  Testimony indicated that the aircraft in question was one of seven or eight from a reserve unit based at Los Alamitos Naval Air Station near Los Angeles.  The aircraft were equipped with bomb racks that had been configured by the Navy using spare parts from bomb racks which dated back to WWII.   Chief Petty Officer Donald A. Jones, Aviation Ordnance Chief for Squadron VA 771, told the board that two other practice bombs had fallen accidentally from Navy planes into San Francisco Bay during the previous two weeks.  But no official report was filed by the squadron safety officer on the earlier events.  Jones blamed faulty mechanisms for the accidental drops all of which were made for the A4-A Skyhawk attack bombers stationed at Los Alamitos.

Further testimony from a Navy Aviation Ordnance man indicated that all aircraft are inspected prior to launch, which included confirming the bomb rack and training bombs were securely attached to each aircraft.  It was speculated that the problem might have been internal wear of the bomb release mechanism or reaction to high speed air pressures.   The board wanted to know if the Squadron made any attempt to isolate or mark the faulty bomb racks.  According to the squadron commander of VA771, no procedure was then in place.

During the testimony, the Lt. Commander who was the liaison officer between the reserve and active groups at Los Alamitos said the Alameda tower knew the planes were carrying weapons and it was listed in the IFR flight plan.  He told the board it was standard operating procedures to avoid heavily populated areas.  Flying out of NAS Los Alamitos did not allow any aircraft with weapons aboard because of the over populated areas and the location of the base.  Alameda Naval Air Station is located near major cities but had weapons operating procedures approved by the FAA.  They had been doing it for years on all flight operations from the opening of the Base.

When Lt. Kiner departed from Alameda Naval Air Station, the weather was overcast with base clouds at 600 feet and reported clear at 2000 feet.  The Lt. was instructed to depart from runway 25 under Instrument Flight Rules.  The runway points directly at San Francisco.  He was directed at take-off by Oakland Departure Control to maintain runway heading until reporting on top and in the clear. 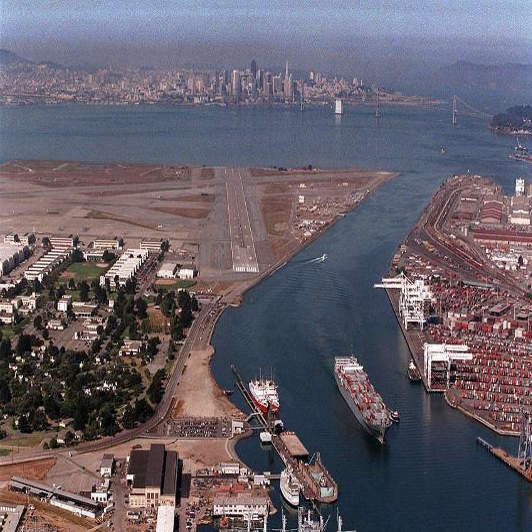 Once the Lt. was clear of the clouds, and released from departure control he made a right turn to avoid flying over any other parts of the city, only to find out much later, that he had lost one of his bombs in the process.  All of the flight was on radar recording at the FAA Departure Control and Crow’s Landing.  According to testimony by the Flight Training Officer for the Naval Air Reserve Training unit, it was uncommon to depart from Runway 25 when cloud conditions were overcast.  In clear weather aircraft would turn to the right as soon as they cleared the runway to avoid flying over the city.

The results of the Navy Board of Inquiry did trigger a review of all procedures surrounding flights with such armaments.   There was no FAA testimony during the inquiry.  News accounts indicated the FAA declined to appear, claiming the Navy would have to request official appearance in writing.

Such a request would require approval from the FAA Regional office in Los Angeles, which would require time for the agency to review and authorize the appearance.  The Navy concluded that this would delay the hearings and not be appropriate given the nature of the investigation.  The inquiry proceeded without the FAA participation. 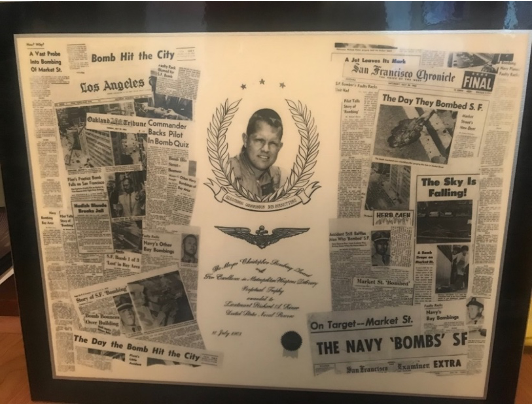 Lt. R.A. Kiner, was working for Autonetics in Anaheim as a Customer Relations Representative in the aerospace industry at the time of this incident.  Though the incident that day was not to be taken lightly, members of his department did not let the events go unnoticed.  A conference was being held at the company on the Air Force F-105 capability to attack a city. Fitting with the topic of the conference, the department recognized his performance by awarding him the ‘The Mayor Christopher Bombing Award for Excellence in Metropolitan Weapons Delivery’.