The cold steel bow of the USS America cut through the waters of the Western Mediterranean with ease. USS America is an aircraft carrier over 1000 feet long and weighing 70,000 tons. The 5000 crew operate 79 aircraft from 5 acres of flight deck. USS America is essentially sovereign territory of the United States showing the flag during the later vestiges of the COLD WAR. At the time, the Soviet Union was considered the threat in Europe and so each side had a political policy of engaging in cat and mouse maneuvering to keep tabs on one another. Many times a small vessel, which was supposed to look like a medium sized fishing vessel but un-characteristically displaying an array of multiple radio antennas, was a converted Russian trawler.   This was, in fact, the other side shadowing our ship wherever we went. Our intelligence officer called it an AGI.

Showing the flag is an important political strategy aimed at balancing power projection by both sides. We were operating in the Western Mediterranean where we periodically engage in war games and exercises to keep us sharp. We operated day and night conducting the full range of operations the air wing of the ship may be called upon to use if necessary.

Our air wing consists of several different types of aircraft each specifically designed for its particular mission. There are two squadrons of F-4 Phantom fighters, two squadrons of light attack flying the A-7 Corsair II and a medium attack squadron flying the A-6 Intruder. These squadrons made up the power projection part of the air wing with other squadrons performing support missions. The fighters are capable of supersonic speeds.   Their mission is to protect the ship against enemy aircraft and to protect attack aircraft when they are sent to interdict enemy targets with enemy fighters airborne to stop the attack planes. Day and night operations are conducted to exercise all aspects of the carrier task force.

I am a junior Lieutenant and pilot assigned to Attack Squadron Eighty-Two flying the A-7E.  This is the latest version of this aircraft. I had made a previous deployment to Vietnam flying the first model of the A-7, the A model. The A-7E had a larger engine and a whole suite of navigation and weapons systems that made it a joy to fly. Unlike the fighters with their thin wings to allow supersonic flight, the A-7 had a “fat” wing designed to produce a lot of lift in order to carry very heavy bomb loads. The squadron was called the “Marauders”. We are part of Air Wing Eight and our mission is day and night attack. We practice bombing and the delivery of virtually most types of munitions we can carry. We are also used as surveillance platforms sent out from the ship on long range searches noting positions of Soviet ships and even taking pictures to confirm identification.  They keep tabs on us and we keep tabs on them. Essentially the tempo at sea is always very busy with many sorties being launched and recovered both day and night.

Every pilot in the squadron has an assigned job to support the squadron. We are a small squadron with just one pilot in the aircraft.  So each pilot has several jobs to support the functioning of the squadron. One of my jobs was Quality Assurance Officer.  As a division officer, I had several senior enlisted personnel assigned to me who basically provided technical information to the various maintenance shops repairing aircraft.  Their biggest responsibility was to inspect all maintenance operations on the squadron aircraft to certify work quality.  There are significant consequences at the end of a catapult launch if aircraft maintenance was not done correctly.

When large maintenance functions are performed on an airplane, a “Test Flight” is often required before assigning it to regular squadron operations.  It was my job to fly these test hops. I enjoyed this job because it required me to be very familiar with every system in the airplane and I believe it made me a better pilot. The best part was it gave me a little extra flight time.

The A-7 had the Allison TF-41, A2 turbofan engine. One of our aircraft had malfunctions in the engine that required an engine change.  Engine changes required a test hop, so on August 21st, 1971 I was assigned A-7E serial 157525 for an engine change test flight.  These flights come with a flip pad booklet of instructions of all of the detailed requirements to ensure the engine is operating properly at various altitudes and conditions. It was a beautiful summer day in the western Mediterranean. The sun shone brightly and there were only a few wisps of clouds, so it was a great day to go flying.  My test flight was added to the flight schedule as an “add on” to all of the other normal sorties for fighters, attack and support aircraft. I was parked on the flight deck and started with the rest of the aircraft not knowing when they would come and get me and fit me into the dance of the launch of around twenty or so aircraft. That was okay with me, as I wanted plenty of time to ensure the engine was operating properly. The yellow shirt plane director approached my aircraft and signaled for all the tie down chains to be removed.  Once free, they taxied me to the waist catapult for my launch.  Maintenance had done a great job, and as the test flight progressed, I became more and more confident of the reliability of the engine as it checked out well within performance parameters.

The last thing on the checklist was a high-altitude test. It required a climb to 30,000 feet and to run the engine up to full power. Once producing full thrust, the procedure was to rapidly pull the throttle to idle and as the engine decelerated through 85 percent, throw the throttle back to full power. Everything checked good.  It was getting close to recovery time which meant that I needed to get down and join in the squadron assigned holding pattern ready when the recovery of airborne aircraft started.  Having been busy with engine checks I needed to locate the position of the ship. I checked the navigation instruments and lo and behold, I was coming up on being almost directly over the ship.  I checked the engine change checklist and a high-speed dive would complete the engine check.

What happened next is the crux of this sea story. I decided to leave the power at military power. I was now indicating Mach .8 or about 3/4s the speed of sound. A good start. I gently pushed the nose over until I was in a ninety-degree dive standing on the rudder pedals going straight down. 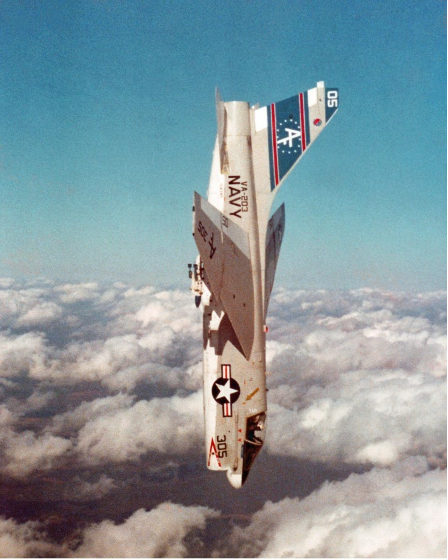 I now bore-sighted the ship and had a chuckle as I was having fun.  I watched the airspeed increase slowly at first, then it jumped past Mach .90. Half way down, I wondered how fast this thing would go. I waited …… To my surprise it passed Mach 1.0 I am supersonic!  I decided to let her go a little longer just to see what she would do.  By this time, I could not read the altimeter as it was unwinding wildly.  I realized I was getting past my normal pull-out altitude, so one last quick check of airspeed, indicated Mach 1.04.  I thought with the fat wing this baby is not supposed to go supersonic!

Things happened quickly after that. I arrived in our squadrons holding altitude on the port side of the ship.  Once the recovery started with the fighters landing first I made my approach and had a good acceptable pass to a trap. OK, aircraft checks good.  I descended the ladder to a small compartment used by our squadron just below the flight deck. This was our maintenance control. I signed in the airplane as checking good. This paperwork gave the airplane back to our maintenance control department. I was confident that it was a good flight. As I was signing the maintenance record yellow sheet, the ships announce system came to life. There was the usual whistle to get everyone’s attention then this announcement:

It was a very emphatic announcement.  “OH MY GOSH”, the maintenance chief replied, which surprised me.  “You were airborne on the last launch so you missed it. Some asshole fighter pilot BOOMED the ship! The ship about bounced four feet out of the water with the supersonic BOOM. No one was expecting anything so the admiral must have thought World War 3 must have started and ordered the ship immediately to General Quarters. The whole 5000 crew scrambled to their battle stations. Everything went quiet while they figured out there was no threat and we secured from general quarters just a little while ago. Boy, the admiral wants that fighter pilot really bad”.

I reflected on my decisions flying the test flight. It all seemed like a good idea at the time but I did not anticipate the probable consequences. I decided right then and there that this would be one sea story I would keep to myself until after I retired. As an afterthought, I never heard of anyone taking an A-7 SUPERSONIC!

Captain Eric Jensen began US Navy surface career as a Seaman Recruit. He progressed to Seaman before transferring to an aviation career as an Airman, followed by an ADJ-3 (Jet Engine Mechanic, E-4). In June 1965, he moved into flight training as an AVROC-1, followed by AVROC-2 and then a commission on August 12, 1966. Flying beginning in T-34, T2A, then F-9. Transferred to Replacement Training with A-7A and between 1969-70. He flew 119 combat missions from USS Coral Sea. USS America, 1971 Mediterranean cruise in A-7E. NAS Lemoore, as an A-4 Fleet Replacement Training Instructor. Moved to NAS Pt. Mugu, VA-305 Naval Air Reserves. NAS North Island COMNAVAIRPAC Staff, Force Operations. Promoted to Captain 1987, Retired 1990