In 1985, under the leadership of Major Raymond H.W. Pett, USMC (Ret), the Grampaw Pettibone Squadron (GPS) originated an award, formalized in the GPS By-laws, to recognize “…members or friends of the ANA or GPS for their dedicated service and contribution to the organization(s)”.  The committee of active GPS Fellows recently met and selected seven current members who have distinguished themselves by their actions and activities in support of GPS and ANA.  Thus, this month they are joining the 44 distinguished GPS Fellows award recipients of past years.

These squadron members being honored will be very familiar names to most members and especially past meeting attendees.  They are:  Vincent van den Brink, Cindy Macha, David Franzen, Sel Ramsay, David Malmad, Bill Thompson and Ed Mason.  In normal times there would have been a very formal ceremony at a squadron meeting, presided over by the senior Naval Aviator (or Fellow) present.  The awardees would be introduced, their accomplishments acknowledged, and they would be presented an Award Warrant and an elegant six inch bust/trophy of Grampaw Pettibone (photo below).  Since these are not normal times (in so many ways), the awards were presented individually by the GPS Commanding Officer in different locations and on different dates with social distancing recognized.  We have memorialized the presentations by photographs which accompany this article.

The GPS Fellowship Committee and the Commanding Officer wish to congratulate the recipients and thank them for their service to GPS and ANA.  Without their uncompensated/volunteer efforts, GPS would not be one of the top squadrons in ANA.  Further, we would not be able to support the SOQ Awards nor would we be able to persuade such excellent guest speakers to come to Garden Grove, CA.

Thanks to all of the new Fellows and congratulations for a job well done.  There is more information on each of them below.

Skippers update:  Our squadron is being challenged, much like all other similar organizations, in these stressful times.  Over the past couple of years our membership was steadily dwindling, and attendance at face to face meetings was dropping quickly too.  Attendance at our current Zoom meetings is below thirty individuals, including some from Two Block Fox Squadron.  It occurs to me that we are going to have to alter our meeting structure and the formality that has previously existed.  I’ll put out another message before 12 November wherein I will present our options.

Congratulations to the New Fellows

Each Fellow was presented with Warrant attesting to his or her selection as a GPS Fellow.  Also, each received a very impressive bust of Grampaw Pettibone; impressive artwork to match impressive performance

Vincent van den Brink has been a member of ANA since 2008.  He is a former parachute soldier who served with the 101st Airborne in Vietnam.  Vince is also active in Navy League and has used his contacts there to help arrange GPS trips and speakers.  For more than five years, Vince has been the Executive Officer of GPS.  Before that and concurrent with his duties as XO, Vince was our Trips Officer.  He arranged all of our tours and trips for many years before we just ran out of enough people who were capable and desirous of visiting bases, ships or squadrons.  In addition to those duties, Vince filled in for the CO on those occasions when he was not able to make a lunch or staff meeting.  We can always count on Vince to be there when he was most needed.

Cindy Macha has been our Operations Officer from almost the first day that she joined ANA in 2013.  She has been an outstanding liaison between industry and GPS, seeking and getting tremendous speakers from throughout the Southland.  She has recruited many truly exciting presenters who have educated us, entertained us and awed us.  She knows everybody important in the aerospace industry and has made it her duty to get them to come to Garden Grove to brief us on many varied subjects.  In addition to running the briefings, she also produced the press releases that announced each speaker.  Without Cindy we would not have had such wonderful speakers over the last few years.  In her “Day Job” as Executive Director of the Western Museum of Flight, she proudly supports Navy and Marine Corps Aviation with an F-14 Tomcat and a Marine A-4 Seahawk displayed on her museum flight line.

Dave Malmad hit the ground running when he joined ANA in 2017.  He immediately volunteered to act as our Public Affairs Officer.  He has also continued to act as our go-between with our Webmaster.  Dave was instrumental in the creation of the Facebook page for GPS and is our point man when interacting with the Editor of Wings of Gold.  You can see evidence of Dave’s wordsmithing on our website, in Wings of Gold and on our Facebook page.   When we started working on Zoom meetings, Dave was the leader and expert who has made the meetings run smoothly.  Without Dave, the world would not know how well we are doing at GPS. 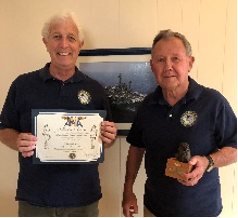 Dave Franzen has been the Jack of All Trades for GPS.  He is currently our Administrative Officer.  He joined ANA in 2015, just about the time that his son was the XO of Naval Weapon Station Seal Beach (NWSSB).  Dave served in the US Army in Vietnam, and finished his military career stateside.  Once he became a member of GPS, he immediately volunteered to help with membership growth and fund raising.  His infectious personality fit in immediately with our longtime members.  He has provided transportation and support for many of our elderly members over the years.  When Bill Thompson needed assistance with the collection of gift certificates for the SOQ program, Dave jumped in without hesitation.  He has attended our luncheons and staff meetings on a regular basis.  He is an outstanding individual who really cares about his fellow man, whether they be member or guest, he is the best host ever.

Sel Ramsay joined ANA in 1983 and is a Life Member.  He was friends with many of the founding members of GPS prior to joining.  Sel is a retired Navy Captain.  He is a “Black Shoe” with very close ties to the aviation side of the Navy.  He has actually flown in a blimp, not the Goodyear blimp, but a real Navy blimp.  For many years, Sel was very active with the local chapter of what is now the Association of the United States Navy.  He ran that chapter for many years and is still active but he turned his attention and energies towards GPS about five or six years ago when he took over the demanding job of Membership Officer.

Ed Mason is a retired Navy Chief Aviation Electrician Mate.  He joined ANA in 2000 as a Life Member.  Ed is our Greeter and Raffle Officer.  Many years ago, Ed and the late Andy Benjock came up with the idea of a 50/50 raffle.  The staff talked it over, and after discussion, it was decided to go forward with the idea.  That idea has turned into a great, steady source of funds that we use for the SOQ Awards Program.  Ed was also instrumental in obtaining some very large contributions to GPS that also will allow us to continue funding the SOQ awards for many years to come.

Bill Thompson is our long serving Chaplain who joined ANA in 2005 as a Life Member.  Bill is a retired Army Colonel who has served in both the Army and the Navy, and as Chaplain to a Marine Battalion in I Corps, ministering to the Marines in that AO.  Bill has done it all quietly and professionally:  invocations, burial services, changes of command, retirement ceremonies, and checking on members/ families in times of particular need.  Bill also was the strength of the SOQ Awards Program at NWSSB.  He interacted with the command on a regular basis, meeting with the CO and/or XO of the base, and worked constantly with the Command Senior Chief to make sure that GPS had timely notification of the sailor’s names for award preparation and meeting scheduling.  A coordinating challenge done professionally and in a timely fashion.

These new GPS Fellow’s certainly embody the following excerpt from the original 1985 award precept;   “- – – granted to members or friends of the Grampaw Pettibone Squadron whose contribution of service and dedication for the betterment of the goals and high principles of the Association of Naval Aviation and the Grampaw Pettibone Squadron is significantly above and beyond that which is expected.”  Simply put, they are the folks that “make it go.” 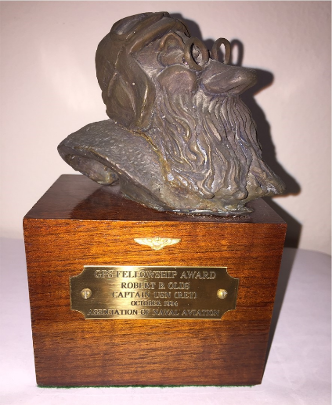