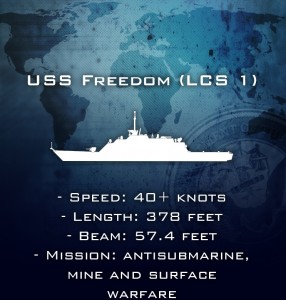 We are getting a great deal from two building yards, and both yard shave invested a lot of private capital to expand their industrial capacity. The two builders are managing their transition from “stickbuilt ” research and development designs to serial production, and have shown solid learning curves in that transition process. The current program of record is 52 warships between the two classes. In the current and projected budget environment, we should ask what other missions we want and need these warships to take on, and how many more of these warships we should buy. I can easily envision twice the number of littoral combat ships in the fleet, maintaining persistence presence and relieving our more expensive ships of vital work so they can reset and refit and not have to execute expensive operations at sea.